I am changing hosts 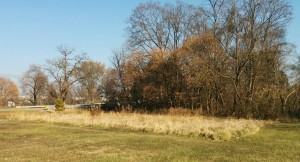 I took this picture of the field to forest experiment today.  It has been 18 months since the last post.  The picture doesn’t look like much but the area of “high grass” has not been touched in the last 2 years.  Some small treas are growing but nothing significant yet.  Some other areas of the property are converting faster however this is the only area that I plan to not touch.

I have taken a few pictures of this area since the experiment however I have not been posting because nothing significant has been happening.

It is said that a field is a forest waiting to happen.  Yesterday I cut the grass in what was the field and I left a a section at the far end of the property uncut.  This will be my Permaculture Zone 5 which is unmanaged land.  My plan is to not do anything with this section of land and see what happens.  I assume the edge of the tree line will creep into the field over time.

My plan is to take a picture at the beginning of each month to document the progress of the forest.  The picture at the top of the post is from the yard.  The next two pictures are different angles.

I was working in the yard yesterday while Evelyn was collecting seeds from her favorite flowers.  She was collecting dandelion seeds in a sandwich bag. 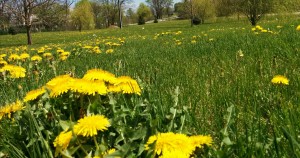 She was moving from seed ball to seed ball and filling filling her bag.  I asked if I could video her and ask a few questions.  She said “OK but I may be a little shy”.  with that I made the Seed Video that is now on the Thistle Dew Farmstead YouTube Channel.

I am still learning WordPress so for now I am pressing forward with posts and putting content out here I as I have time.  I am trying to document my adventures with Evelyn and make posts about the what is happen on the Farmstead.

Please feel free to contact me with any suggestions or thoughts you may have.

I had a teaching moment with Evelyn today.  I wanted to see if I could move an old claw foot tub.  The tub was not moved very far but some good lessons were learned.  The tub probably weights between 250 and 350 pounds and we moved it a short distance with T-Post, piece of log and part of an old telephone pole.

I don’t know how much Evelyn will retain but she does know a T-Post can be used as a lever and a piece of log can be used as a fulcrum.  A lever is one of the six simple machines  identified by Renaissance scientists.  I don’t remember what grade I was in but I know it was high school physics when Mr. Underkoffler taught me about the six simple machines.  I don’t expect Evelyn to understand the math behind a lever and fulcrum but she does know that she can use a lever to lift something that too heavy to lift without a “machine”.

Tomorrow I will have her looking for levers in the world around her.

I will also have a Facebook post and YouTube video to go with this post.  I am still working on making better links to the blog.  I also just realized that I have no photos from tonight just video.  So this post will have no photos.

For the first day of 2016 we spent the day on the Farmstead and enjoyed a day off.  It was a great day.  We slept in then put a pork roast and sauerkraut in the crock pot for dinner.  We worked around the house to the aroma of slow cooking pork and kraut.

I spent about an hour outside measuring and setting landscape flags for the future chicken area and food forest.  I will be putting the measurements into Google SketchUp and working the plans up on the computer over the next few months so hopefully I will have a plan for chickens and planting in the spring.

After I was done measuring and placing flags Tandy and I walked around the land.  I think she was chasing field mice in the tall grass.  I saw at least 7 blue birds in the tree line along the road.

It was a good day. 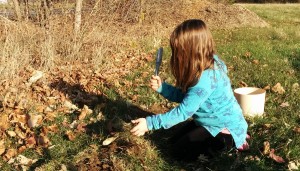 Today was a great day especially for the end of November.  Evelyn and I did a little planting.  I planted a current on the edge of the field next to what I am planing to turn into a chicken paddock.  After the current was planted we moved to tree line by the road and planted sunchokes.  I loosely turned some soil so Evelyn could plant the tubers.

Evelyn was planting and singing.  We had a lot of fun.  She would occasionally get distracted by a worm or a bug.  Pearl came out and we talked down to see the stream.  As we were approaching the woods a buck got up an moved through the woods to the rail trail and vanished into the trees.

While we were watching the deer Evelyn came walking up with a grass seed head in her mouth.  She said “Call me farmer Evelyn.”

On Sunday the 22nd we were in the kitchen and saw a deer walking through the yard.  After going to the window we realized there was buck following two does.  I got one picture out the sliding glass door before Tandy saw them and barked.  The three of them ran through the tree line behind the house and disappeared into the field.

Tonight as we were leaving the house we saw a skunk looking through the leaves in the driveway.  We patiently watched from the Jeep until it wondered along the tree line next to the road.

I took a vacation day today because the forecast looked good.  It was a great day for November 4th.  I believe the high was in the 70s.  I was planting in shorts and  a T-Shirt.  I dug up plants at the old house and planted them on the Farmstead.  My main planting of the day was garlic.  The soil in the garden future food forest) was great.  It was easy to turn a shovel full to plant garlic.  The area I chose for the garlic was tilled in years past.  The soil was very nice.  I saw a few earth worms and even found a millipede.

I planted the following today:

Thistle Dew Farmstead now has a YouTube Channel complete with a chicken video.  I will be using the channel to document happenings around the Farmstead.  Right now the channel is still being developed.